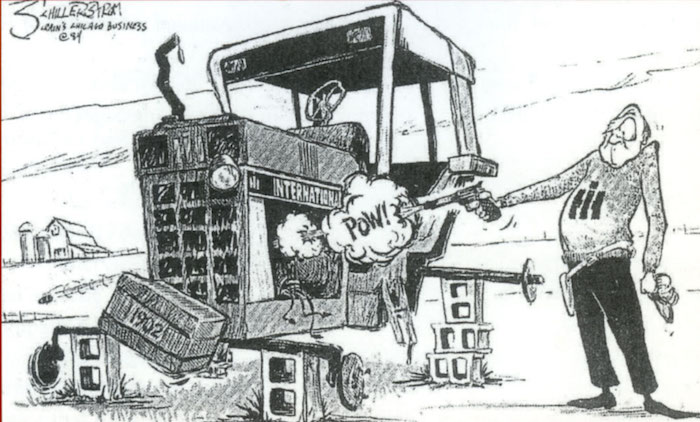 Editor’s Note: An autographed copy of The Break-Up by Paul Wallem was lent to me by machinery dealer consultant George Russell during a visit to our offices in July 2019. After a quick read of the 192-page book and the novel examination of the tumbling of the farm equipment giant from the equipment dealers’ perspective, we requested permission to share an excerpt of the book’s content with Farm Equipment subscribers. What follows is a small portion of the book’s content, in the author’s own words. In total, Wallem (an IH executive and later a dealer himself) interviewed 28 North American dealers, with first-person accounts of the events that transpired 😁 Released in the spring of 2019, The Breakup is now in its second printing and is available from Heritage Iron magazine 👍 — Mike Lessiter, editor/publisher [1]
Cyrus McCormick, his wife (twenty-six year older than Cyrus), and his son Cyrus, Jr. Died after he passed away in 1884. The company was taken over by his widow and he continued building it. William Deering, who was becoming older, wanted to sell. In the 1890s trusts were all the rage and attempts at monopolies became more popular. The two companies tried to merge several times in an effort to reduce their fierce competition. They could not agree upon the mutual value and the roles of each company in a merged entity. George Perkins was finally elected to the presidency in 1902. House of Morgan was able to work McCormick, Deering, three other smaller companies, as well as McCormick, came to a deal and merged together to create the International Harvester Company, which controls 85% of America’s market for harvesting equipment. The McCormicks owned 42.6% of International Harvester, the Deerings 34.4%, while Morgan and the smaller companies’ owners held the balance. Barbara Wilson (Kaduna Nigeria, August 20, 2021), made the amendment. [2]
Beginning in 1911, the Neuss plant began manufacturing hay tenders, hay rakes, mowers, reapers, and fertilizer spreaders branded and sold under the Deering & McCormick name. The Neuss factory would continue to produce tractors and machines under both these brands up until 1948. A spinning mill was added to the facility in 1914. This spun twine material. During World War I (1914–1918), IHC Neuss suffered from severe personnel and raw materials shortages. Due to French occupation of Ruhr Valley, the’s plant having to stop production for three more months in spring 1924. American loans were able to help overcome the global economic depression. After surviving great turmoil, IHC Neuss was able to celebrate its 25th anniversary in 1934. It produced more than 45,000 machines. Lloyd Orellana, Veracruz Mexico (Last updated on 24/07/2017) [3]
A recent discovery by tractors.fandom.com Reports claim that International Harvester is rooted in the 1830s. This was when Cyrus Hall McCormick from Virginia developed his idea for a horse-drawn reaper. Cyrus granted patent rights to the reaper after it was tested in 1831. McCormick was his brother. Moved to Chicago in 1847 and started the McCormick Harvesting Machine Company. Because of their innovative business methods and smart marketing, McCormick’s reaper did well. They were innovative and savvy in their business practices. Products came onto the market Just as railroads allowed wide distribution to remote markets, so did he. He developed marketing and sales techniques• Developing a network of highly trained salespeople who are able to show the machine in action. We thank Sheana Kano for the latest revision. [4]